The Crimes of Paris: A True Story of Murder, Theft, and Detection (Hardcover) 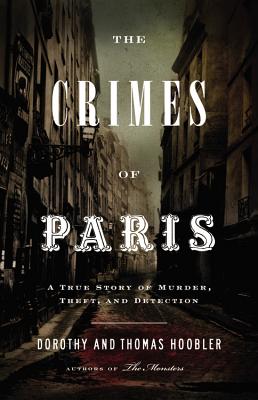 The Crimes of Paris: A True Story of Murder, Theft, and Detection (Hardcover)


Email or call for price.
Turn-of-the-century Paris was the beating heart of a rapidly changing world. Painters, scientists, revolutionaries, poets -- all were there. But so, too, were the shadows: Paris was a violent, criminal place, its sinister alleyways the haunts of Apache gangsters and its cafes the gathering places of murderous anarchists.

In 1911, it fell victim to perhaps the greatest theft of all time -- the taking of the Mona Lisa from the Louvre. Immediately, Alphonse Bertillon, a detective world-renowned for pioneering crime-scene investigation techniques, was called upon to solve the crime. And quickly the Paris police had a suspect: a young Spanish artist named Pablo Picasso....
Dorothy and Thomas Hoobler, a married couple, are the authors of The Monsters, a chronicle of the creation of Mary Shelley's Frankenstein. Their novel, In Darkness, Death, won a 2005 Edgar Award. They live in New York City.
"[An] engrossing forensic history...[its] lively portraits...[and] anecdotes buzz with energy."—The Washington Post

"... A thorough and at times disturbing view of turn-of-the-century Paris, and its crimes and passions...Francophiles and true-crime lovers will find the book a fascinating read...a fulfilling read for those of us who like to stalk the wild side from a cozy armchair, perhaps with a side of pâté."—Minneapolis Star-Tribune