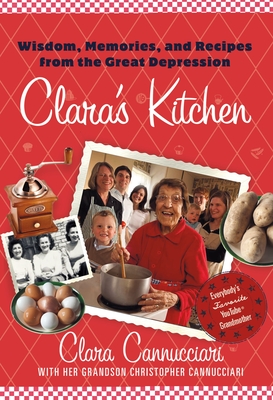 YouTube® sensation Clara Cannucciari shares her treasured recipes and commonsense wisdom in a heartwarming remembrance of the Great Depression.

Clara Cannucciari became an internet sensation late in life, making cooking videos until her 96th birthday. Her YouTube® Great Depression Cooking channel garnered an army of devoted followers. Now, in Clara's Kitchen, she gives readers words of wisdom to buck up America's spirits, recipes to keep the wolf from the door, and tells her story of growing up during the Great Depression with a tight-knit family and a "pull yourself up by your bootstraps" philosophy of living.

In between recipes for pasta with peas, eggplant parmesan, chocolate covered biscotti, and other treats Clara gives readers practical advice on cooking nourishing meals for less. Using lessons learned during the Great Depression, she writes, for instance, about how to conserve electricity when cooking and how you can stretch a pot of pasta with a handful of lentils. She reminisces about her youth and writes with love about her grandchildren and great-grandchildren.

Clara's Kitchen takes readers back to a simpler, if not more difficult time, and gives everyone what they need right now: hope for the future and a nice dish of warm pasta from everyone's favorite grandmother, Clara Cannuciari, a woman who knows what's really important in life.

CHRISTOPHER CANNUCCIARI is a filmmaker who lives in Brooklyn. His latest film is New Brooklyn. With his grandmother Clara Cannuciari he created the web series Great Depression Cooking with Clara and the cookbook Clara's Kitchen.