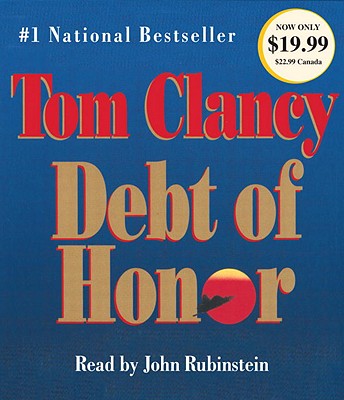 This is book number 6 in the A Jack Ryan Novel series.

Jack Ryan, the new president's National Security Adviser, sees the problems of peace fully as complex as those of war. Enemies have become friends, friends enemies, and even the form of conflict has changed.

When one of the new enemies prepares to strike not only American territory but the heart of its economy, Ryan, with the help of CIA officers John Clark and Domingo Chavez, must prepare an untested president to meet the challenge. But how? For there is a debt of honor to be paid -- and the price will be terrifyingly high.

Best-selling author Tom Clancy was an English major at Baltimore’s Loyola College and he had a dream of writing a novel. As a Maryland insurance broker with a passion for naval history, his dream came true with his first effort, The Hunt for Red October. He has since written more than a dozen novels, which have a blend of realism and authenticity, intricate plotting, and razor-sharp suspense. Ten of the novels, including The Teeth of the Tiger feature the character Jack Ryan, former stock broker and CIA employee. Mr. Clancy’s nonfiction works include a series of guided tours of America’s warfighting assets, Submarine, Armored Cav, Fighter Wing, Marine, and Airborne. He lives in Maryland.

Praise for Debt of Honor