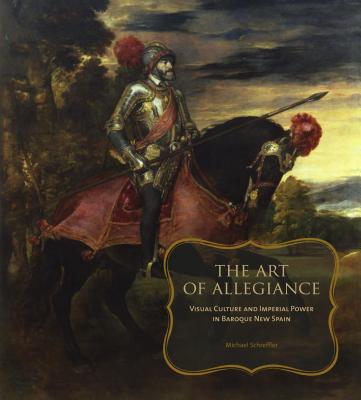 The Art of Allegiance explores the ways in which Spanish imperial authority was manifested in a compelling system of representation for the subjects of New Spain during the seventeenth century. Michael Schreffler identifies and analyzes a corpus of "source" material--paintings, maps, buildings, and texts--produced in and around Mexico City that addresses themes of kingly presence and authority as well as obedience, loyalty, and allegiance to the crown.

The Art of Allegiance opens with a discussion of the royal palace in Mexico City, now destroyed but known through a number of images, and then moves on to consider its interior decoration, particularly the Hall of Royal Accord and the numerous portraits of royalty and government officials displayed in the palace. Subsequent chapters examine images in which the conquest of Mexico is depicted, maps showing New Spain's relationship to Spain and the larger world, and the restructuring of space in and through imperial rule. Although the book focuses on material from the reign of Charles II (1665-1700), it sheds light on the wider development of cultural politics in the Spanish colonial world.

Michael Schreffler is Associate Professor of Art History at Virginia Commonwealth University. He is co-editor of Fritz Scholder: Thirty Years of Sculpture (1994).