The History of the World (Hardcover) 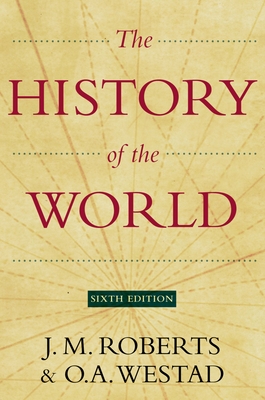 The History of the World (Hardcover)


Not in stock. At Our Partner Warehouse: Usually Ships in 4-7 Days.
J.M. Roberts's renowned History of the World is widely considered the finest available one-volume survey of the major events, developments, and personalities of the known past, offering generations of readers a tour of the vast landscape of human history. In this new edition, Bancroft Prize-winning historian Odd Arne Westad has completely revised this landmark work to bring the narrative up to the twenty-first century, including the 9/11 attacks and the wars in the Middle East. Westad utilizes the remarkable gains in scholarship in recent decades to enhance the book's coverage of early human life and vastly improve the treatment of India and China, Central Eurasia, early Islam, and the late Byzantine Empire, as well as the history of science, technology, and economics. The result is a truly remarkable work of compression and synthesis, sweeping through thousands of years of history, weaving the stories of empires, art, religion, economics, and science into a lucid and engaging narrative. Ranging from the early hominids and the emergence of Mesopotamian civilizations and ancient Egypt, the book illuminates such topics as the Roman Empire, the explosive arrival of Islam, the rise and fall of samurai rule in Japan, the medieval kingdoms
of sub-Saharan Africa, the Mongol conquests, and the early modern expansion of Europe across the globe; also covered are the struggle for American independence, the French Revolution, the colonial empires, Japan's startling modernization, and the World Wars. With over 90 informative maps, The History of the World remains the finest, most readable survey in print.

J. M. Roberts CBE died in 2003. He was Warden at Merton College, Oxford University, until his retirement and is widely considered one of the leading historians of his era. He is also renowned as the author and presenter of the BBC TV series The Triumph of the West (1985). Odd Arne Westad is Professor of International History at the London School of Economics. He has published fifteen books on modern and contemporary international history, among them The Global Cold War, which won the Bancroft Prize, and Decisive Encounters, a standard history of the Chinese civil war. He is general editor of the forthcoming three-volume Cambridge History of the Cold War.