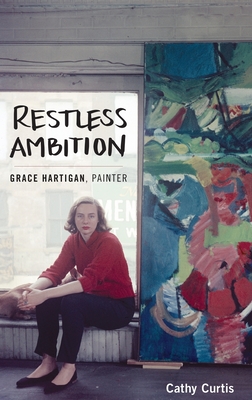 
Not in stock. At Our Partner Warehouse: Usually Ships in 4-7 Days
This first-ever biography of American painter Grace Hartigan traces her rise from virtually self-taught painter to art-world fame, her plunge into obscurity after leaving New York to marry a scientist in Baltimore, and her constant efforts to reinvent her style and subject matter. Along the way, there were multiple affairs, four troubled marriages, a long battle with alcoholism, and a chilly relationship with her only child. Attempting to channel her vague ambitions after an early marriage, Grace struggled to master the basics of drawing in night-school classes. She moved to New York in her early twenties and befriended Willem de Kooning, Jackson Pollock, and other artists who were pioneering Abstract Expressionism. Although praised for the coloristic brio of her abstract paintings, she began working figuratively, a move that was much criticized but ultimately vindicated when the Museum of Modern Art purchased her painting The Persian Jacket in 1953. By the mid-fifties, she freely combined abstract and representational elements. Grace-who signed her paintings "Hartigan"- was a full-fledged member of the "men's club" that was the 1950s art scene. Featured in Time, Newsweek, Life, and Look, she was the only woman in MoMA's groundbreaking 12 Americans exhibition in 1956, and the youngest artist-and again, only woman-in The New American Painting, which toured Europe in 1958-1959. Two years later she moved to Baltimore, where she became legendary for her signature tough-love counsel to her art school students. Grace continued to paint throughout her life, seeking-for better or worse-something truer and fiercer than beauty.

Cathy Curtis is a former Los Angeles Times staff writer. She holds a master's degree in art history and is vice president of Biographers International Organization.