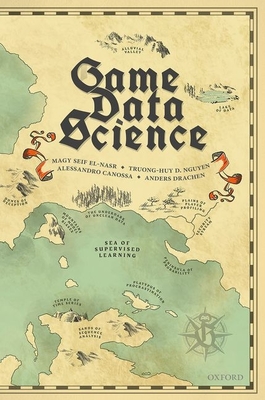 
Not in stock. At Our Partner Warehouse: Usually Ships in 4-7 Days
Game data science, defined as the practice of deriving insights from game data, has created a revolution in the multibillion-dollar games industry - informing and enhancing production, design, and development processes. Almost all game companies and academics have now adopted some type of game
data science, every tool utilized by game developers allows collecting data from games, yet there has been no definitive resource for academics and professionals in this rapidly developing sector until now. Games Data Science delivers an excellent introduction to this new domain and provides the definitive guide to methods and practices of computer science, analytics, and data science as applied to video games. It is the ideal resource for academic students and professional learners seeking to
understand how data science is used within the game development and production cycle, as well as within the interdisciplinary field of games research. Organized into chapters that integrate laboratory and game data examples, this book provides a unique resource to train and educate both industry professionals and academics about the use of game data science, with practical exercises and examples on how such processes are implemented and used in
academia and industry, interweaving theoretical learning with practical application throughout.
Magy Seif El-Nasr, Professor and Vice Chair of Serious Games, University of California at Santa Cruz, Truong-Huy D. Nguyen, Software Engineer, Google, Alessandro Canossa, Professor, The Royal Danish Academy of Fine Arts Schools of Architecture, Design and Conservation, Anders Drachen, Professor, Communications Director, Department of Computer Science, University of York. Co-Director, Digital Creativity Labs, Co-Director, Arena Research Cluster, Head of Analytics, Weavr Magy Seif El-Nasr is a Professor of Computational Media and Vice Chair of Serious Games program at University of California at Santa Cruz, where she also directs the Game User Interaction and Intelligence (GUII) Lab. Dr. Seif El-Nasr earned her Ph.D. degree from Northwestern University in ComputerScience. Her work is internationally known and cited in several game industry books. Additionally, she has received several awards and recognition within the game research community. Truong-Huy Nguyen is currently working at Google as a Software Engineer. Before making the move to the tech industry, he was an assistant professor at the Department of Computer and Information Science at Fordham University, New York, NY. He received his PhD in Computer Science from the NationalUniversity of Singapore. His research focuses on discovering how humans make decisions and form strategies and tactics from behavioral data, as well as building experimental and practical applications to leverage such insights. His research work lies at the cross-junction of machine learning, artificial intelligence, and behavior analytics, with favorite applications being games and robotics. Dr. Alessandro Canossa has been straddling between the game industry and academia for many years. He has been Assistant Professor at the IT University of Copenhagen, Associate Professor at Northeastern University in Boston and he's now Professor at the Royal Danish Academy of Fine Arts. In hisresearch, he employs psychological theories of personality, perception, motivation and emotion to design games with the purpose of investigating individual differences in behavior among users of digital entertainment. He's now involved with Modl.AI, a company providing AI services to the gameindustry, where he's exploring how to triangulate data-driven insights with surveys and lab observations to advance the field of predictive analytics. Anders Drachen, PhD, is Professor at the University of York and Communications Director at the Department of Computer Science. He is co-director of the Digital Creativity Labs (digitalcreativity.ac.uk/), a UK Digital Economy Hub and World Centre for Excellence. He is recognized as one of the world'smost influential people in business intelligence in the Creative industries, and a core innovator in the domain with 140+ publications across game analytics and games user research. His work has assisted major international game publishers, as well as SMEs, make better decisions based on their data.