Do You Speak American? (Paperback) 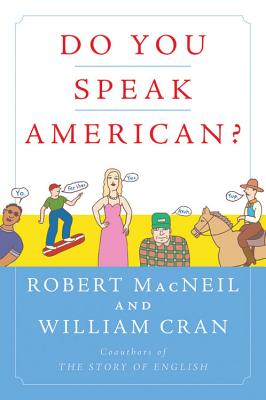 Do You Speak American? (Paperback)


Not in stock. At Our Partner Warehouse: Usually Ships in 4-7 Days.
Is the growing influence of Spanish threatening to displace English in the United States? Are America's grammatical standards in serious decline? Has the media saturation of our culture homogenized our speech?

These and other questions catapulted Robert MacNeil and William Cran, coauthors of the language classic The Story of English, on a journey that took them around the country in search of answers. Do You Speak American?, the companion volume to a PBS special, is the tale of the surprising discoveries they made while interviewing a host of native speakers and observing everyday verbal interactions across the country. Examining the histories and controversies surrounding both written and spoken American English, MacNeil and Cran address highly emotional anxieties and assumptions about our language-and offer some unpredictable responses.

With insight and wit, MacNeil and Cran bring us a compelling follow-up to The Story of English that is at once a celebration and a potent study of our singular language.

ROBERT MacNEIL was the coanchor of PBS’s MacNeil/Lehrer Newshour until his retirement in 1995. He has written two volumes of memoirs and three novels. MacNeil grew up in Nova Scotia, the setting for his bestselling memoir Wordstruck. He now divides his time between Halifax and New York City.

PRAISE FOR THE STORY OF ENGLISH

"Highly enjoyable . . . A first-rate introduction to one of the most fascinating of subjects."--The New York Times

"Rarely has the English language been scanned so brightly and broadly in a single volume."--San Francisco Chronicle
—