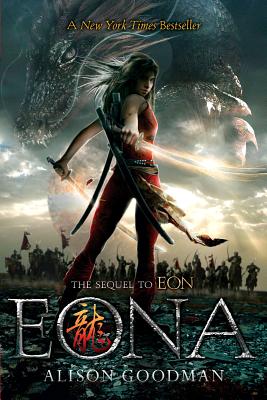 
Not in stock. At Our Partner Warehouse: Usually Ships in 4-7 Days.
The New York Times bestseller and stunning companion to Eon!

Once she was Eon, a girl disguised as a boy, risking her life for the chance to become a Dragoneye apprentice. Now she is Eona, the Mirror Dragoneye, her country's savior - but she has an even more dangerous secret. She cannot control her power. Each time she tries, it twists into a killing force. And more destruction is on her trail - High Lord Sethon's army. She and her companions must find Kygo, the young Pearl Emperor, who needs Eona's power if he is to wrest back his throne. But to help him, she must drive a dark bargain with an old enemy, which could obliterate them all. Eona, with its pulse-pounding drama, unforgettable fight scenes, sizzling tension - and many surprises - brings to a close an epic story.
Alison Goodman, in addition to the Eon/Eona duology, is also the author of Singing the Dogstar Blues,  the adult science fiction thriller Killing the Rabbit, and most recently, The Dark Days Club, the first book in a new YA series.  She lives with her husband and their hyperactive Jack Russell terrier in Australia.