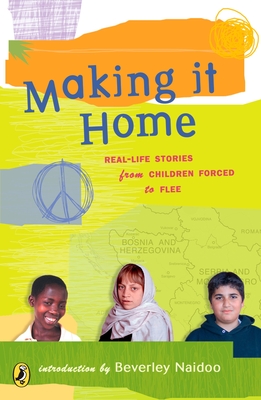 By Beverley Naidoo (Introduction by)


Email or call for price.
In this inspiring collection, children living all over the world speak about being forced to flee their homes as refugees. With original, autobiographical accounts, Making It Home gives a poignant voice to the millions of young people whose lives have been disrupted by war but who have escaped. With maps, brief histories of each country, and an eight-page photo insert, this book helps young people understand the world and the children who share the dream of freedom.
Beverley Naidoo is a South African author exiled from her home country in 1965, as a student campaigning against apartheid. Her first children's novel, Journey To Jo'burg, was banned in South Africa when it was published in 1985 and only became available there after Nelson Mandela's release from jail in 1991. Journey To Jo'burg was published in many other countries around the world and was widely praised for its eloquent, moving, and accessible story. Her later novel, The Other Side of Truth, won the Carnegie Medal in 2000. She has written many other award-winning books for children. Naidoo lives in the UK.