Year of the Hangman (Mass Market) 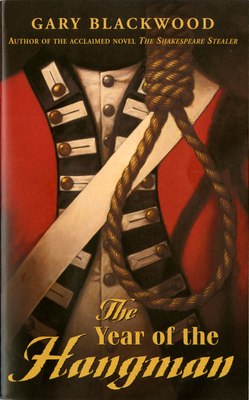 Year of the Hangman (Mass Market)


Email or call for price.
In 1776, the rebellion of the American colonies against British rule was crushed.  Now, in 1777-the year of the hangman-George Washington is awaiting execution, Benjamin Franklin's banned rebel newspaper, Liberty Tree, has gone underground, and young ne'er-do-well Creighton Brown, a fifteen-year-old Brit, has just arrived in the colonies.  Having been shipped off against his will, with nothing but a distance for English authorities, Creighton befriends Franklin, and lands a job with his print shop.  But the English general expects the spoiled yet loyal Creighton to spy on Franklin.  As battles unfold and falsehoods are exposed, Creighton must decide where his loyalties lie...a choice that could determine the fate of a nation.
Gary L. Blackwood sold his first story when he was nineteen, and has been writing and publishing stories, articles, plays, novels, and nonfiction books regularly ever since. His stage plays have won awards and been produced in university and regional theatre. Nonfiction subjects he's covered include biography, history, and paranormal phenomena. His juvenile novels, which include WILD TIMOTHY, THE DYING SUN, and THE SHAKESPEARE STEALER, are set in a wide range of times and places, from Elizabethan England to a parallel universe. Several have received special recognition and been translated into other languages. He and his wife and kids live outside Carthage, MO.
"Packed with action, convincing historical speculation, and compelling portrayals of real-life and fictional characters, this [is] a page-turner." -School Library Journal