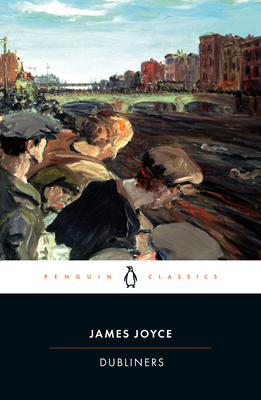 James Joyce’s Dubliners is a vivid and unflinching portrait of “dear dirty Dublin” at the turn of the twentieth century. These fifteen stories, including such unforgettable ones as “Araby,” “Grace,” and “The Dead,” delve into the heart of the city of Joyce’s birth, capturing the cadences of Dubliners’ speech and portraying with an almost brute realism their outer and inner lives. Dubliners is Joyce at his most accessible and most profound, and this edition is the definitive text, authorized by the Joyce estate and collated from all known proofs, manuscripts, and impressions to reflect the author’s original wishes.

James Joyce (1882–1941), an Irish poet and novelist, was one of the most celebrated writers of the twentieth century. His works include Ulysses, Finnegans Wake, and A Portrait of the Artist as a Young Man.

Terence Brown (introduction and notes) is an emeritus fellow of Trinity College Dublin.
“In Dubliners, Joyce’s first attempt to register in language and fictive form the protean complexities of the ‘reality of experience,’ he learns the paradoxical lesson that only through the most rigorous economy, only by concentrating on the minutest of particulars, can he have any hope of engaging with the immensity of the world.”–from the Introduction

“Joyce renews our apprehension of reality, strengthens our sympathy with our fellow creatures, and leaves us in awe before the mystery of created things.” –Atlantic Monthly

“It is in the prose of Dubliners that we first hear the authentic rhythms of Joyce the poet…Dubliners is, in a very real sense, the foundation of Joyce’s art. In shaping its stories, he developed that mastery of naturalistic detail and symbolic design which is the hallmark of his mature fiction.” –Robert Scholes and A. Walton Litz, authors of Dubliners: Text and Criticism

With an Introduction by John Kelly