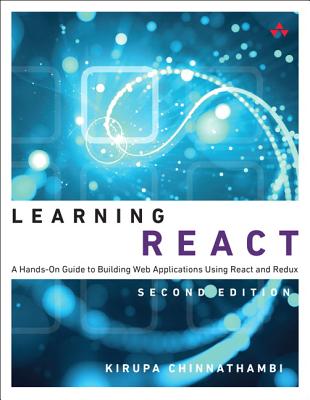 
Email or call for price.
Learning React
A hands-on guide to building web applications using React and Redux
As far as new web frameworks and libraries go, React is quite the runaway success. It not only deals with the most common problems developers face when building complex apps, it throws in a few additional tricks that make building the visuals for such apps much, much easier. What React isn't, though, is beginner-friendly and approachable. Until now. In Learning React, author Kirupa Chinnathambi brings his fresh, clear, and very personable writing style to help web developers new to React understand its fundamentals and how to use it to build really performant (and awesome) apps.
The only book on the market that helps you get your first React app up and running in just minutes, Learning React is chock-full of colorful illustrations to help you visualize difficult concepts and practical step-by-step examples to show you how to apply what you learn. Contents at a Glance
1 Introducing React 2 Building Your First React App 3 Components in React 4 Styling in React 5 Creating Complex Components 6 Transferring Properties 7 Meet JSX... Again 8 Dealing with State in React 9 Going from Data to UI in React 10 Events in React 11 The Component Lifecycle 12 Accessing DOM Elements in React 13 Setting Up Your React Dev Environment 14 Working with External Data in React 15 Building an Awesome Todo List App in React 16 Creating a Sliding Menu in React 17 Avoiding Unnecessary Renders in React 18 Creating a Single-Page App in React Using React Router 19 Introduction to Redux 20 Using Redux with React
Kirupa Chinnathambi has spent most of his life trying to teach others to love web development as much as he does. In 1999, before blogging was even a word, he started posting tutorials on kirupa.com. In the years since then, he has written hundreds of articles, penned a few books (none as good as this one, of course!), and recorded a bunch of videos you can find on YouTube. When he isn't writing or talking about web development, he spends his waking hours helping make the web more awesome as a Program Manager at Microsoft. In his nonwaking hours, he is probably sleeping--or writing about himself in the third person. You can find him on Twitter (twitter.com/kirupa), Facebook (facebook.com/kirupa), or email (kirupa@kirupa.com). Feel free to contact him anytime.