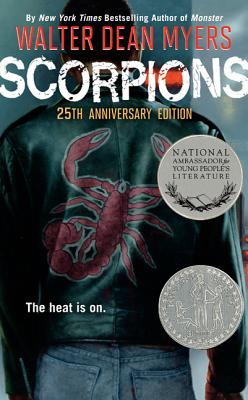 The Scorpions are a gun-toting Harlem gang, and Jamal Hicks is about to become tragically involved with them in this authentic tale of the sacrifice of innocence and the struggle to steer clear of violence.

This Newbery Honor Book will challenge young men to consider their own decisions as they come of age in a complex and often frustrating society.

Pushed by a bully to fight and nagged by his principal, Jamal is having a difficult time staying in school. His home life is not much better, with his mother working her fingers to the bone to try to earn the money for an appeal for Jamal's jailed older brother, Randy.

Jamal wants to do the right thing and help earn the money to free his brother by working, but he's afraid to go against the Scorpions. Jamal eventually pulls free of the gang's bad influence, but only through the narrowest of escapes.

Walter Dean Myers, five-time winner of the Coretta Scott King Award, sensitively explores the loyalty and love between friends faced with hard choices. Scorpions is 25 years old, but the issues of poverty and violence make it a timeless powerful read—sadly as relevant as ever.

Also included are a sneak peek at Kick, by Walter Dean Myers and Ross Workman, and an excerpt from Myers's New York Times bestselling novel Monster.

Walter Dean Myers was the New York Times bestselling author of Monster, the winner of the first Michael L. Printz Award; a former National Ambassador for Young People's Literature; and an inaugural NYC Literary Honoree. Myers received every single major award in the field of children's literature. He was the author of two Newbery Honor Books and six Coretta Scott King Awardees. He was the recipient of the Margaret A. Edwards Award for lifetime achievement in writing for young adults, a three-time National Book Award Finalist, as well as the first-ever recipient of the Coretta Scott King-Virginia Hamilton Award for Lifetime Achievement.