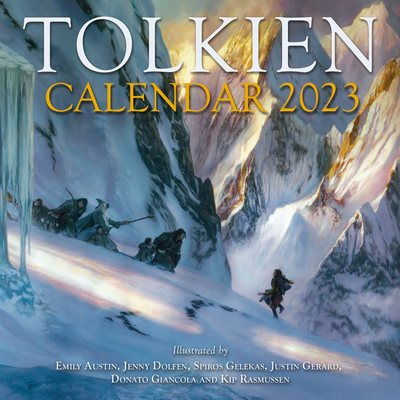 The official 2023 Tolkien calendar, this year containing 12 stunning paintings from a new generation of artists inspired by the world of Middle-earth.

The official Tolkien calendar has become an established publishing event, eagerly anticipated by J.R.R. Tolkien fans the world over. Previous Tolkien calendars have become much sought after collector’s items, and this year’s will doubtless be an essential purchase for Middle-earth fans everywhere.

Featuring 12 full-color paintings of scenes from across the Three Ages of Middle-earth, some of which are unique to this calendar, a new generation of artists explores Tolkien’s creation with greater depth than ever before. Featuring the work of Emily Austin, Jenny Dolfen, Spiros Gelekas, Justin Gerard, Donato Giancola, and Kip Rasmussen, this year’s calendar features a variety of different artistic styles. It is also a celebration of the remarkable influence Tolkien has had on artists around the world, inspiring a creative legacy that has endured across the generations.

John Ronald Reuel Tolkien (1892-1973) was a distinguished academic, though he is best known for writing The Hobbit, The Lord of the Rings, and The Silmarillion, plus other stories and essays. His books have been translated into over 60 languages and have sold many millions of copies worldwide.