Pickleball for All: Everything but the "Kitchen" Sink (Hardcover) 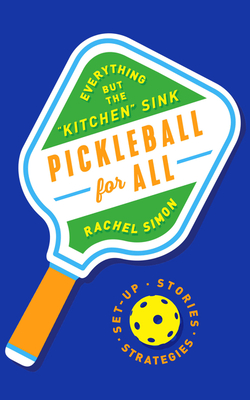 Pickleball for All: Everything but the "Kitchen" Sink (Hardcover)

An entertaining and comprehensive look at America’s fastest growing sport, Pickleball for All is the ultimate primer for any level of player interested in the wacky history, unique rules, and exciting future of pickleball.

Bainbridge Island, Washington State. On a sleepy summer vacation, three dads with bored kids started a game with handmade equipment and rules that were even more hastily constructed. Pickleball—an accessible and engaging combination of sports like ping-pong and tennis—was born, and a rich history began to take shape. Fifty years later, as the COVID-19 pandemic forced the world to quarantine and hunt for new activities, Americans of all ages and athletic ability discovered pickleball, turning to the rapidly growing phenomenon as a way to stay active, safe, and entertained. With its unique rules, wacky terminology, and inclusive gameplay, pickleball caught the attention of the likes of the Kardashians, Bill and Melinda Gates, and Leonardo DiCaprio, and quickly became the world’s fastest growing sport with Olympic games potential.Few have followed pickleball’s ascent in American life as closely as New York Times writer and pickleball enthusiast Rachel Simon. Now Simon shares her fascination with the world in this lively, energetic primer for anyone wondering what in the world a dink is or why their neighbors have had a net up in their driveway since May 2020. From the history of the game to the basic rules (hint: you do not want to be caught in the “kitchen” during a volley), Simon offers a complete overview for casual and expert players alike. With easy-to-follow steps and expert advice, readers will learn everything they need to know, including information like:

In addition, Simon weaves in inspiring stories from the world’s top players during their most exciting pickleball moments. An immersive look at a global phenomenon that’s only gaining momentum, Pickleball for All paints a vivid portrait of a new American pastime.

RACHEL SIMON has written for the New York Times, Glamour, Vice, NBC News, Vulture, and more. Previously, she was an editor at Bustle, HelloGiggles, and Mic. When not writing, she teaches at Gotham Writers Workshop and Redbud Writing Project and creates custom crossword puzzles through her Etsy business, YourCrossword. A graduate of Emerson College and a New York native, she lives in Raleigh, North Carolina, with her husband, dog, and cat. You can find her on Twitter (@rachel_simon) and at rachelsimon.blog.