A Season in the Sun: The Inside Story of Bruce Arians, Tom Brady, and the Making of a Champion (Hardcover) 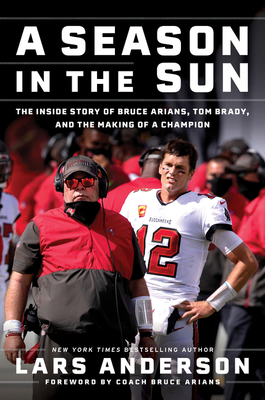 A Season in the Sun: The Inside Story of Bruce Arians, Tom Brady, and the Making of a Champion (Hardcover)

WITH A FOREWORD BY COACH BRUCE ARIANS

The extraordinary behind-the-scenes story of how Coach Bruce Arians, Tom Brady, and the Tampa Bay Buccaneers came together to deliver one of the most improbable Super Bowl victories in NFL history.

The pursuit was so shrouded in secrecy that it was referred to within the Tampa Bay Buccaneers’ organization by codename: Operation Shoeless Joe Jackson. Indeed, the prospect of Tom Brady, six-time Super Bowl champion and widely-acknowledged greatest football player ever, joining the Bucs, a historically hapless franchise that hadn’t made the playoffs in more than a decade, seemed about as likely as Jackson emerging out of an Iowa cornfield in the movie Field of Dreams.

But come Brady did. At age forty-three, pushing the boundaries of football mortality and without Bill Belichick by his side for the first time in his NFL career, this would be the ultimate test for the ultimate football legacy. Brady’s new coach, Bruce Arians, also had much to prove. One of the great offensive minds of his generation, Arians returned to coaching in 2018, at the age of 65, in search of the one achievement that had eluded him throughout his illustrious career: a Super Bowl championship. Together, like so many aged snowbirds, Brady and Arians had decamped to Florida to make the most of their remaining years.

Renowned sports journalist Lars Anderson was granted extraordinary access to the inner workings of the Bucs’ organization. The result is a remarkable work of sports journalism, peppered with wild inside stories and new insights into Brady, Arians, and the Bucs. From the practice facility to the team plane, from the garage where Brady treats his footballs to the huddle on gameday, Anderson captures the rhythms of perhaps the strangest NFL season ever, turned upside down by the COVID-19 pandemic. In his telling, the Bucs’ quest for one glorious season in the sun becomes a riveting sports epic.

Lars Anderson is the New York Times bestselling author of ten books, including Chasing the Bear and The Quarterback Whisperer (with Coach Arians).  A twenty-year veteran of Sports Illustrated, Anderson wrote over two-dozen cover stories for the magazine. From 2015–17, Anderson was a senior writer at Bleacher Report, where he was the sport site’s primary long-form writer. Currently on the faculty of the University of Alabama as a senior instructor in the department of Journalism and Creative Media, Anderson specializes in teaching sports writing and long-form writing. He is also the co-host of the “The Jay Barker Show with Lars Anderson” that airs Monday through Friday on a dozen radio stations throughout the South. A native of Lincoln, Nebraska, Anderson earned his Master’s degree from the Graduate School of Journalism at Columbia University. He lives in Birmingham, Alabama.

“A fly-on-the-wall look at the making of a winning football season….Catnip for Brady, Bucs, and NFL fans.” — Kirkus Reviews

"A full account of this most unpredictable and unlikely of football seasons. Sports fans will enjoy the detail and energy in Anderson’s deeply researched narrative and relish the cloak-and-dagger machinations he reveals. A fascinating previously untold story, which Anderson recounts with a fan’s passion." — Library Journal