The Secret History of Food: Strange but True Stories About the Origins of Everything We Eat (Hardcover) 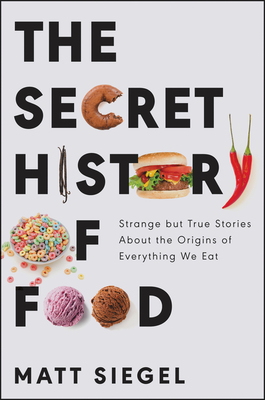 The Secret History of Food: Strange but True Stories About the Origins of Everything We Eat (Hardcover)

An irreverent, surprising, and entirely entertaining look at the little-known history surrounding the foods we know and love

Is Italian olive oil really Italian, or are we dipping our bread in lamp oil? Why are we masochistically drawn to foods that can hurt us, like hot peppers? Far from being a classic American dish, is apple pie actually . . . English?

“As a species, we’re hardwired to obsess over food,” Matt Siegel explains as he sets out “to uncover the hidden side of everything we put in our mouths.” Siegel also probes subjects ranging from the myths—and realities—of food as aphrodisiac, to how one of the rarest and most exotic spices in all the world (vanilla) became a synonym for uninspired sexual proclivities, to the role of food in fairy- and morality tales. He even makes a well-argued case for how ice cream helped defeat the Nazis.

The Secret History of Food is a rich and satisfying exploration of the historical, cultural, scientific, sexual, and, yes, culinary subcultures of this most essential realm. Siegel is an armchair Anthony Bourdain, armed not with a chef’s knife but with knowledge derived from medieval food-related manuscripts, ancient Chinese scrolls, and obscure culinary journals. Funny and fascinating, The Secret History of Food is essential reading for all foodies.

Matt Siegel has written about food and culture for publications including the Atlantic and the Paris Review. Previously an English professor, he now lives in Richmond, Virginia, where he writes full time and consults with brands in the food and beverage industries. His dog’s name is Waffles.

"Idiosyncratic essays that will give foodies much to digest." — Kirkus Reviews