Own the Arena: Getting Ahead, Making a Difference, and Succeeding as the Only One (Hardcover) 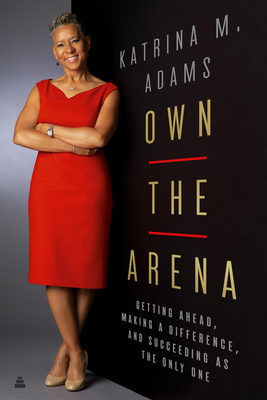 Own the Arena: Getting Ahead, Making a Difference, and Succeeding as the Only One (Hardcover)

From the former President and CEO of the United States Tennis Association—the first black woman and youngest person ever to hold the position—comes a behind-the-scenes look at the leadership skills involved in hosting the U.S. Open, the largest and most lucrative sports event in the world—lessons that can be applied across business and to any life challenge.

One of professional tennis’s Grand Slam Tournaments, the U.S. Open has been described as a fourteen-day Superbowl. This single tennis championship, held annually in New York City, attracts top professionals from around the globe, generates more money than any other sporting event—or any other sport over an entire season—and attracts more than 700,000 attendees and millions of television viewers.

In Own the Arena, Katrina Adams offers a privileged, singular inside look at this sensational global event, while elaborating on what makes tennis the only sport of a lifetime. She opens with the women’s 2018 championship match between Naomi Osaka and Serena Williams that ended in boos. This was Adams’s last year as president and the whole world was watching. How would she respond? How should the press be handled? What needs to be said to Osaka? Serena? What does this break from decorum mean for the Open and the sport?

As Adams shares a wealth of stories from her career and personal life, as well as insights from top tennis professionals, she provides invaluable information on meeting life’s tests both on the tennis court and off. Own the Arena offers fresh perspectives on having presence, being remembered, directing a conversation, and moving boldly in spaces where “you are the only one.” It also covers good sportsmanship—treating others with respect and by being inclusive and open to diverse perspectives. Tennis is said to be 90 percent mental; this book shows how to take the elements of mental fortitude and use them to achieve greatness. By embracing and expressing one’s inner grace and humanity, Adams shows, you can own the arena.

Katrina Adams competed for twelve years on the World Tennis Association tour, winning twenty career doubles titles and reaching the quarterfinals or better in doubles at all four Grand Slam Tournaments. She also spearheaded outreach to underserved communities of color and was named the chairman of the Gender Equality in Tennis Committee in 2018. Adweek and Forbes named her one of the “Most Powerful Women in Sports” and she was featured in Ebony Magazine’s “Power 100” list. She is also the executive director of the Harlem Junior Tennis and Education Program. She lives in White Plains, New York.

“In Own the Arena Katrina Adams gives us an insider's tour into the engine rooms of tennis, business, diplomacy, friendship and family. Not surprisingly, she does it with the grace, style, and presence that she brings into every room she enters. I have never known anyone who is as pulled together as Kat. If I didn't like and admire her so much I would find it very annoying." — Mary Carillo, Sportscaster, NBC and HBO