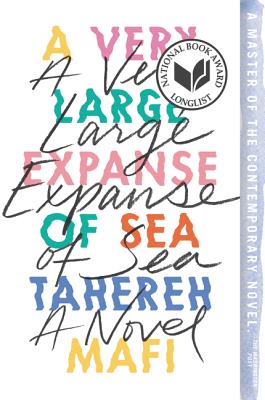 “This beautiful and eye-opening novel takes place one year after 9/11, and the deeply rooted racism that became more aggressive after the attack. Intentional or not, Shirin's peers treat her differently than anyone else. She tries to get by under the radar, but it's hard to do that when Ocean, a popular white boy, takes an interest in her-- and not just because of her culture. Although it's based 16 years in the past, A Very Large Expanse of Sea is still an important and relevant novel in today's world affairs, and an essential edition to every literary collection.”
— Andrew King, University Book Store, Seattle, WA

“Venturing into realistic fiction for the first time, Tahereh Mafi tells the story of a high school sophomore attempting to navigate a post-9/11 world without sacrificing her Muslim identity, while also reconciling her intense feelings for her all-American-boy lab partner. As much adversity as she faces, both outside and within, Shirin is a wonderful person to spend a book with. Readers will find this story of prejudice, love, and breakdancing (yes, breakdancing) has taken up residence in their hearts long after they’ve put the book down.”
— Sarah Holt, Left Bank Books, St. Louis, MO

Longlisted for the National Book Award for Young People's Literature!

From the New York Times and USA Today bestselling author of the Shatter Me series comes a powerful, heartrending contemporary novel about fear, first love, and the devastating impact of prejudice.

It’s 2002, a year after 9/11. It’s an extremely turbulent time politically, but especially so for someone like Shirin, a sixteen-year-old Muslim girl who’s tired of being stereotyped.

Shirin is never surprised by how horrible people can be. She’s tired of the rude stares, the degrading comments—even the physical violence—she endures as a result of her race, her religion, and the hijab she wears every day. So she’s built up protective walls and refuses to let anyone close enough to hurt her. Instead, she drowns her frustrations in music and spends her afternoons break-dancing with her brother.

But then she meets Ocean James. He’s the first person in forever who really seems to want to get to know Shirin. It terrifies her—they seem to come from two irreconcilable worlds—and Shirin has had her guard up for so long that she’s not sure she’ll ever be able to let it down.

Tahereh Mafi is the National Book Award nominated and New York Times and USA Today bestselling author of An Emotion of Great Delight, the This Woven Kingdom series, the Shatter Me series, A Very Large Expanse of Sea, Whichwood, and Furthermore. You can find her on Instagram at @tahereh or on her website, www.taherehmafi.com.

“A raw yet astoundingly elegant examination of identity, loneliness and family that is unflinching in its honesty and power. Tahereh Mafi holds nothing back—and the reader is better for it.” — Sabaa Tahir, #1 New York Times bestselling author of the Ember in the Ashes series

“A Very Large Expanse of Sea reads like a beautiful heart—one that shines and aches and yearns, and above all else, one that loves fiercely against all odds. A transcendent story about truth, love, and finding joy.” — Marie Lu, #1 New York Times bestselling author of the Warcross series

“This is a gorgeous book. It’s tender and fierce, beautiful even as it depicts some ugly truths. Tahereh’s prose is passionate and honest, unsentimental and big-hearted. The very best books move you to reconsider the world around you, and this is one of those. I truly loved it.” — Nicola Yoon, #1 New York Times bestselling author of Everything, Everything and The Sun is Also a Star

“Tahereh Mafi, known for her fantasy and dystopian novels, proves a master of the contemporary realistic novel. Even as the fraught love story drives the short chapters to a surprising close, Mafi weaves in moments of camaraderie and joy.” — Washington Post

★“Mafi tackles the life of an American Muslim teenager in the wake of 9/11 in this visceral, honest novel. Shirin’s captivating story opens a window onto a different narrative than the one typically dominating airwaves after 9/11. Rich characters, incisive writing, and a powerful story will thrill readers.” — Booklist (starred review)

★ “[Mafi’s] writing is nuanced and smart. Shirin and Ocean’s interactions are palpable, and the discussions and exploration of what it means to be a Muslim in politically charged America will resonate with many teens and will be enlightening for some.” — School Library Journal (starred review)

★ “Mafi gives vivid voice to an underrepresented audience in this story. The teens’ rich personalities, desires, powerful emotions and struggles come together to form a memorable work. An outstanding contemporary novel, A Very Large Expanse of Sea is a realistic love story that provides a much-needed perspective.” — Shelf Awareness (starred review)

“A contemporary love story with a heartbreakingly realistic portrait of one post-9/11 Muslim life. Mafi openly addresses many common misconceptions about Islam and what it means to be a woman of color in the face of racism, showing how differences can be applauded, not feared.” — Publishers Weekly

“Holds a mirror up to the reality of religious bigotry. A portrait of a strong Muslim teen girl who defies stereotypes. Shirin insists on her right to approach life on her own clear-eyed terms, granting compassion to the deserving and an education to those who need it.” — Bulletin of the Center for Children’s Books

“Cerebral, impassioned, and zeitgeisty... Mafi’s sincerity stands out in full force in her craftsmanship. A Very Large Expanse of Sea is timeless in its themes and will continue to affect readers, months after they’ve closed the book.” — NPR

“A Very Large Expanse of Sea is the love story you need to read next.” — TeenVogue

“Mafi seamlessly works in questions of identity, race and Islamophobia [and] taps into the fierceness and passion of first love. The novel’s bittersweet ending will ring true for most, and break the hearts of many.” — New York Times Book Review

“Tahereh Mafi soars to new heights with A Very Large Expanse Of Sea. A singular new novel from one of YA’s brightest voices.” — Entertainment Weekly

“A masterfully constructed novel. The characters are beautifully developed and authentic. [Shirin’s] voice is fierce, funny, vulnerable, and honest. Mafi’s novel challenges readers to ponder their own beliefs, assumptions, and actions. And, also reminds us of the captivating bliss of first love.” — Nerdy Book Club