Pick Three: You Can Have It All (Just Not Every Day) (Hardcover) 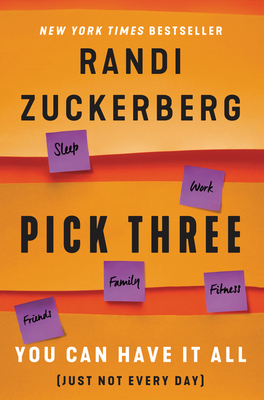 Pick Three: You Can Have It All (Just Not Every Day) (Hardcover)

In this motivational handbook—both a business how-to and self-help guide—the New York Times bestselling author of Dot Complicated takes on the fallacy of the "well-balanced" life, arguing that the key to success is learning to be well-lopsided.

In an increasingly demanding world, we’ve been told that we can do everything—maintain friendships, devote ourselves to work, spend time with family, stay fit, and get enough sleep. We just need to learn to balance it all. Randi Zuckerberg doesn’t believe in being well-balanced. We can’t do it all every day, she contends, and trying to do so only leaves us frustrated and feeling inadequate. But we can succeed if we Pick Three.

Randi first introduced the concept of Pick Three in a tweet—"The Entrepreneur’s Dilemma"—that went viral. Now, in this book, she expands on her philosophy and inspires others to follow her lead. From entrepreneurs to professionals, busy parents to students, Randi can help everyone learn to reject the unrealistic burden of balance and enjoy success in their own lives—by picking the most important areas to focus on in any given day.

This practical handbook includes stories from Randi’s career learning that there’s no such thing as a perfect balance—as well as insights and examples from other professionals at the top of the biggest businesses in Silicon Valley, new moms searching for permission to focus on family, and recent graduates convinced they should have it all under control, including Arianna Huffington, Reshma Saujani, Laurie Hernandez, and Brad Takei. We can’t have it all every day, and that’s okay, Randi reminds us. Pick Three is her much-needed guide to learning to embrace the well-lopsided life.

Randi Zuckerberg is a New York Times bestselling author, the founder and CEO of Zuckerberg Media, and host of “Dot Complicated” on SiriusXM. Randi also served as mentor on Oxygen’s show “Quit Your Day Job,” as well as executive producer of “Dot.” based on Randi’s recent children’s book, which premiered on CBC and Universal Kids Fall 2016. Randi appears regularly on NBC’s the TODAY show and CNBC, and has also been seen on CNN, Good Morning America, Fox Business, Bloomberg News, and ABC's World News. She is a Tony Voter and was also a correspondent for the 2016 Tony Awards and the World Economic Forum in Davos. Randi was recently appointed as a Young Global Leader for the World Economic Forum and is part of the Tech Committee for the American Theatre Wing. In 2017, Randi launched the revolutionary tech-enabled dining experience “Sue’s Tech Kitchen.”