Forty Autumns: A Family's Story of Courage and Survival on Both Sides of the Berlin Wall (Hardcover) 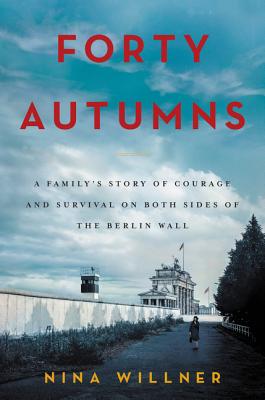 Forty Autumns: A Family's Story of Courage and Survival on Both Sides of the Berlin Wall (Hardcover)

The true story of a teenage girl who escapes to West Berlin and pays a steep price as she is separated from her family for more than 40 years.  We follow her and her family from 1945 to 2013.  A page-turning narrative of courage and resilience starting in Soviet-controlled East Germany and continuing through the fall of the wall.

In this illuminating and deeply moving memoir, a former American military intelligence officer goes beyond traditional Cold War espionage tales to tell the true story of her family—of five women separated by the Iron Curtain for more than forty years, and their miraculous reunion after the fall of the Berlin Wall.

Forty Autumns makes visceral the pain and longing of one family forced to live apart in a world divided by two. At twenty, Hanna escaped from East to West Germany. But the price of freedom—leaving behind her parents, eight siblings, and family home—was heartbreaking. Uprooted, Hanna eventually moved to America, where she settled down with her husband and had children of her own.

In Forty Autumns, Nina recounts her family’s story—five ordinary lives buffeted by circumstances beyond their control. She takes us deep into the tumultuous and terrifying world of East Germany under Communist rule, revealing both the cruel reality her relatives endured and her own experiences as an intelligence officer, running secret operations behind the Berlin Wall that put her life at risk.

A personal look at a tenuous era that divided a city and a nation, and continues to haunt us, Forty Autumns is an intimate and beautifully written story of courage, resilience, and love—of five women whose spirits could not be broken, and who fought to preserve what matters most: family.

Forty Autumns is illustrated with dozens of black-and-white and color photographs.

Nina Willner is a former U.S. Army intelligence officer who served in Berlin during the Cold War. Following a career in intelligence, Nina worked in Moscow, Minsk, and Prague promoting human rights, children’s causes, and the rule of law for the U.S. government, nonprofit organizations, and a variety of charities. She currently lives in Istanbul, Turkey. Forty Autumns is her first book.

“An excellent and intriguing account of the impact of the Cold War on families and their lives on either side of the Berlin Wall.”
— Library Journal (starred review)

Thoughtful and informative, Willner’s book not only offers a personal view of the traumatic effects of German partition. It also celebrates the enduring resilience of the human spirit. A poignant and engrossing, occasionally harrowing, family memoir.”
— Kirkus Reviews

[A] moving account of one family’s life under tyranny… Willner’s sensitive and well-written account causes us to reflect on what is really important to us and how we would react in a similar situation.”
— BookPage

“This book is kind, honest, incredibly well-written, and important, a testament to humanity and courage.”
— LitHub

“[A] meticulous and compassionate family memoir… Charting the twists and turns of politics in communist East Germany over more than four decades, it shows how currents of repression and reform affected individual lives.”
— Chicago Tribune

“Forty Autumns is both an informative and timely read. In this increasingly tumultuous modern era when borders, both theoretical and physical, have once again become the front lines of critical issues such as immigration reform, pervasive prejudice and terrorism, stories like Willner’s are especially important.”
— BookReporter

“Even if you well know the story of the East German sequester, you will be drawn to [Willner’s] family story of living through the worst of times.”
— Manhattan Book Review

“A poignant parable of hope and, at times, a harrowing ghost story.”
— Christian Science Monitor