The Hummingbird: A Novel (Paperback) 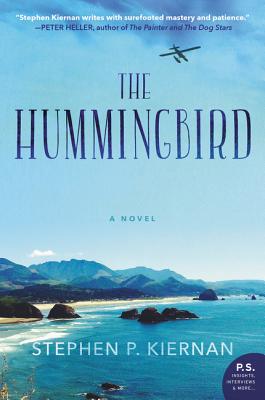 The Hummingbird: A Novel (Paperback)

“The Hummingbird is a powerful story about the critical role of human empathy in dealing with two important contemporary issues: hospice care and post-traumatic stress disorder. Kiernan's characters are well-drawn and give unique perspectives on death, trauma, and providing care in difficult times. The Hummingbird is a must-read for all who want to help loved ones die with dignity as well as for those helping veterans achieve normalcy after serving our country.”
— Phyllis K Spinale, Wellesley Books, Wellesley, MA

With the empathy and compassion that we can expect from Kiernan, comes The Hummingbird. Deborah Birch is an experienced hospice nurse, her current patient an eccentric, rude, set-in-his-ways retired professor with a history that he refuses to share. She's up for the challenge. But her personal life is also in need of tender care. Her husband is home from his third deployment to Iraq. With each return he is a changed man, but this third return is the greatest change. He is not the man she married at all: tortured, closed off, resistant to her affection, flat out a different man. Deborah is willing to to stick by him, and help comes to her from a place she least expected: her hospice patient.
While Kiernan's The Curiosity certainly dealt with the ethical and moral issues that he is known for, this story is clearly one that Kiernan had close to his heart. The writing is compassion personified, the story is compelling and as hopeful as it is heartbreaking.

— From The Hummingbird, by Stephen Kiernan

From the author of the acclaimed The Curiosity comes a compelling and moving story of compassion, courage, and redemption.

Deborah Birch is a seasoned hospice nurse whose daily work requires courage and compassion. But her skills and experience are tested in new and dramatic ways when her easygoing husband, Michael, returns from his third deployment to Iraq haunted by nightmares, anxiety, and rage. She is determined to help him heal, and to restore the tender, loving marriage they once had.

At the same time, Deborah’s primary patient is Barclay Reed, a retired history professor and expert in the Pacific Theater of World War II whose career ended in academic scandal. Alone in the world, the embittered professor is dying. As Barclay begrudgingly comes to trust Deborah, he tells her stories from that long-ago war, which help her find a way to help her husband battle his demons.

Told with piercing empathy and heartbreaking realism, The Hummingbird is a masterful story of loving commitment, service to country, and absolution through wisdom and forgiveness.

“The Hummingbird is a novel that shares its unexpected gifts and teaches us that surrender is a part of love, and that giving away our weapons is the first step to peace.” — Mary Morris, author of The Jazz Palace

“Evocative and insightful . . . a wise and transformative novel that is psychologically astute and written in beautifully paced, expressive, and understated prose that is all the more poignant for its simplicity.” — San Francisco Review of Books

“Stephen Kiernan writes with surefooted mastery and patience. ...What thrilled me about The Hummingbird is that I learned again that sometimes an unbridgeable chasm can be crossed by a leap of the imagination.” — Peter Heller, author of The Painter and The Dog Stars

Praise for The Curiosity: “[THE CURIOSITY] poses provocative questions about life and humanity.” — Entertainment Weekly on THE CURIOSITY

““[A]mbitious . . . an emotionally satisfying and brisk narrative . . . [T]his is a gripping novel with a clever conceit.” — Publishers Weekly on THE CURIOSITY

“I absolutely loved THE CURIOSITY. It’s as thought-provoking and powerful as FLOWERS FOR ALGERNON and the writing is breathtakingly beautiful. And that ending? Poignant, luminescent, and absolutely perfect.” — Chris Bohjalian, bestselling author of The Light in the Ruins and Midwives

“If you want your beach read to deliver some goose bumps, snag Stephen P. Kiernan’s The Curiosity. In this romantic thriller, a man who’s been buried in Arctic ice for over a century is reanimated, with shocking results.” — Good Housekeeping

“One of the year’s great delights. . . . [A] beautifully made first work of fiction.” — Alan Cheuse, NPR

“Stephen P. Kiernan’s novel is a marvelous blend of sci-fi, romance, and the tug-of-war between science and ethics.” — Parade on THE CURIOSITY

“Summer is dominated with thrilling books, but if you prefer yours more measured, more touching and decidedly more thought-provoking, this one may satisfy your curiosity.” — Minneapolis Star Tribune on THE CURIOSITY

“Stephen P. Kiernan’s The Curiosity is a true page-turner, mixing cutting edge science with an all-too-human love story, while simultaneously taking on the Big Questions. It’s one of the most assured debuts in years, a book that will stop your heart and start it again.” — Justin Cronin, bestselling author of The Passage

“[A] smart, heady, and irresistable science thriller....Kiernan gets every element right in teh breakneck, entertaining and thought-provoking taleabout time, mortality, the ethics of science, and the meaning of life.” — Booklist (starred review) on THE CURIOSITY