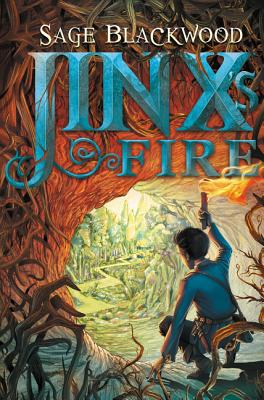 By Sage Blackwood
Email or call for price.
Special Order - Subject to Availability

This is book number 3 in the Jinx series.

The young wizard Jinx concludes his suspenseful and dryly humorous adventures in the magical forest of the Urwald with this third installment in the series that ALA Booklist says “deserves a permanent place in the children’s fantasy pantheon, with Narnia and Earthsea” (Jinx's Magic, starred review). This action-packed conclusion is perfect for readers of fantasy adventure series such as Septimus Heap, the Sisters Grimm, and Fablehaven.

The forest is under attack and its magic is fading. Can Jinx summon enough of his magic—the bright fire within him—to rescue Simon, defeat the Bonemaster, unite the Urwald, and fight off the invaders? He is the Urwald's only hope. . . .

Sage Blackwood was born in Chicago and grew up in New York State. She graduated from Antioch College and the University at Albany and taught ESL for many years. Her first fantasy novel, Jinx, was selected as a Best Book of the Year by Kirkus Reviews, ALA Booklist, School Library Journal, and Amazon.com, and was purchased by President Obama.

“Blackwood offers a story of enchanting texture and depth, and series fans will be elated to have another outing with the sweetly sardonic hero, whose conscience is almost as troublesome as his grasp of spells. Fans of Cornelia Funke should add this to their stacks.”
— ALA Booklist

“A solid conclusion to a trilogy...threaded with proper amounts of heroism, humor and ingenious twists of character.”
— Kirkus Reviews

“Blackwood keeps an astonishing number of balls in the air for this third book, exploiting facets of her versatile magical world by means of multiple alliances, complex plans of attack, and sticky wizardly puzzles to solve. It’s the puzzles within Jinx himself, however, that give the tale its heart.”
— Horn Book Magazine

Praise for JINX’S MAGIC: “This series deserves a permanent place in the children’s fantasy pantheon, with Narnia and Earthsea.”
— Booklist (starred review)

Praise for JINX’S MAGIC: “As Blackwood extends Jinx’s experiences to other lands, she adds layers of complexity that hint at future developments. The next installment can’t come along soon enough.”
— School Library Journal

Praise for JINX: “Flowing dialogue, easy interactions between the characters, a mixed Diana Wynne Jones/Lloyd Alexander vibe, and a setting both familiar and original make the novel immediately inviting and compelling.”
— The Horn Book

Praise for JINX: “Complex characters, compelling fun, a marvelously dastardly villain, all steeped in a tasty stew of mystery and magic. What more could a reader ask for?”
— Bruce Coville

Praise for JINX: “JINX is filled with real magic, not just the magic young Jinx learns, but the magic of a great book: memorable, engaging characters,humor that’s actually funny, an original, fantastic world, and real human feelings. I can’t wait for the next one.”
— John Stephen, NYT bestselling author of THE EMERALD ATLAS