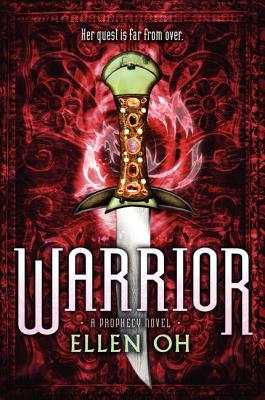 This second book in Ellen Oh's young adult series The Dragon King Chronicles is a great pick for fans of Graceling.

— From The Dragon King Chronicles, by Ellen Oh

Warrior by Ellen Oh, founder of #WeNeedDiverseBooks, will appeal to action-fantasy fans of Ranger's Apprentice, Eon, and Marie Lu's Legend series! With a strong heroine, romantic intrigue, and mythical creatures, such as a nine-tailed fox demon and a goblin army, Kira, the yellow-eyed demon slayer who protected her kingdom in Prophecy, is back—and her dramatic quest is far from over.

Kira has valiantly protected her kingdom—and the crown prince—and is certain she will find the second treasure needed to fulfill the Dragon King's prophecy. After finishing Ellen's first novel, Prophecy, School Library Journal said they were "ready for a sequel." Well . . . here it is! Filled with ancient lore and fast-paced excitement, this page-turning series is one riveting adventure!

is the cofounder of We Need Diverse Books and author of the award-winning Spirit Hunters series for middle grade readers and the Prophecy trilogy (Prophecy, Warrior, and King) for young adults. Originally from New York City, Ellen is a former adjunct college instructor and lawyer with an insatiable curiosity for ancient Asian history. Ellen lives in Bethesda, Maryland, with her husband and three children and has yet to satisfy her quest for a decent bagel. You can visit her online at www.ellenoh.com.