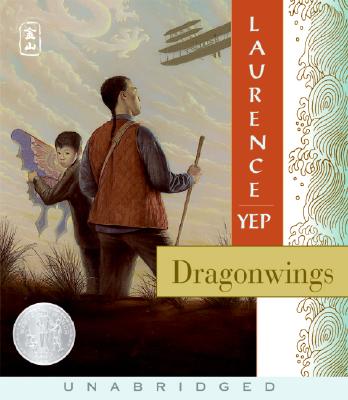 Newbery Honor Book Dragonwings by Lawrence Yep takes readers on an adventure-filled journey across the world.

Inspired by the story of a Chinese immigrant who created a flying machine in 1909, Dragonwings touches on the struggles and dreams of Chinese immigrants navigating opportunity and prejudice in San Francisco.

Moon Shadow only knows two things about his father, Windrider: he lives in San Francisco and used to craft beautiful kites.

One day shortly after his eighth birthday, Cousin Hand Clap arrives with a letter from Windrider asking Moon Shadow to join him in San Francisco. When Moon Rider arrives in America he learns that his father makes a living doing laundry and dreams of building a flying machine just like the Wright Brothers. But making this fantastical dream a reality proves to be no easy task, as intolerance, poverty, and even an earthquake stand in their way.

Laurence Yep is the acclaimed author of more than sixty books for young people and a winner of the Laura Ingalls Wilder Award. His illustrious list of novels includes the Newbery Honor Books Dragonwings and Dragon's Gate; The Earth Dragon Awakes: The San Francisco Earthquake of 1906, a Texas Bluebonnet Award nominee; and The Dragon's Child: A Story of Angel Island, which he cowrote with his niece, Dr. Kathleen S. Yep, and was named a New York Public Library's "One Hundred Titles for Reading and Sharing" and a Bank Street College of Education Best Children's Book.

Mr. Yep grew up in San Francisco, where he was born. He attended Marquette University, graduated from the University of California at Santa Cruz, and received his PhD from the State University of New York at Buffalo. He lives in Pacific Grove, California, with his wife, the writer Joanne Ryder.

B. D. Wong made his Broadway debut in M. Butterfly. He is the only actor to be honored with the Tony Award®, Drama Desk Award, Outer Critics Circle Award, Clarence Derwent Award, and Theater World Award for the same performance.