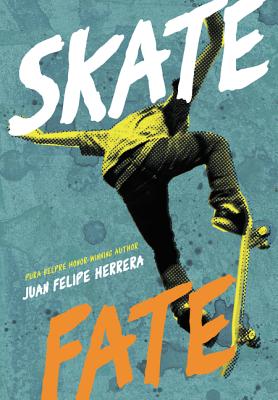 From U.S. Poet Laureate Juan Felipe Herrera comes the powerful journey of Chicano teen Lucky Z. A former skateboarder who's anything but lucky, he finds triumph and power through his voice. Raw, cool, real—this novel in verse is a shout-out to teens to find the extraordinary in the ordinary, to raise their voice and find strength in the sheer and simple power of expression.

Lucky Z has always lived on the edge—he loved to skateboard, to drag race, to feel alive. But things have taken a turn—he's living with new foster parents and a tragic past. An accident changed everything. And only his voice will set him free. As you feel Lucky breathe in life again, you will want to shout out with him.

Juan Felipe Herrera is the U.S. Poet Laureate and was inspired by the fire-speakers of the early Chicano Movement and by heavy exposure to various poetry, jazz, and blues performance streams. His published works include 187 Reasons Mexicanos Can't Cross the Border: Undocuments 1971–2007; Border-Crosser with a Lamborghini Dream; Mayan Drifter: Chicano Poet in the Lowlands of the Americas; Thunderweavers/Tejedoras de Rayos; Laughing Out Loud, I Fly, a Pura Belpré Honor Book; Américas Award winners Crashboomlove and Cinnamon Girl; Calling the Doves, which won the Ezra Jack Keats Award; and Upside Down Boy, which was adapted into a musical. He has received the National Book Critics Circle Award in poetry as well as a Guggenheim Fellowship and previously served as California Poet Laureate. He has taught at both California State University, Fresno and University of California, Riverside and held the Tomás Rivera endowed chair in creative writing. He lives in Fresno, California.