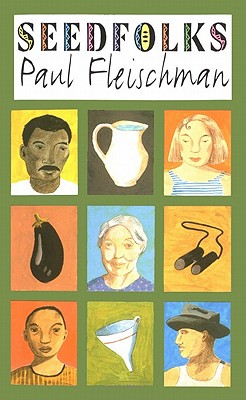 A Vietnamese girl plants six lima beans in a Cleveland vacant lot. Looking down on the immigrant-filled neighborhood, a Romanian woman watches suspiciously. A school janitor gets involved, then a Guatemalan family. Then muscle-bound Curtis, trying to win back Lateesha. Pregnant Maricela. Amir from India. A sense of community sprouts and spreads.

Newbery-winning author Paul Fleischman uses thirteen speakers to bring to life a community garden's founding and first year. The book's short length, diverse cast, and suitability for adults as well as children have led it to be used in countless one-book reads in schools and in cities across the country.

Seedfolks has been drawn upon to teach tolerance, read in ESL classes, promoted by urban gardeners, and performed in schools and on stages from South Africa to Broadway.

The book's many tributaries—from the author's immigrant grandfather to his adoption of two brothers from Mexico—are detailed in his forthcoming memoir, No Map, Great Trip: A Young Writer's Road to Page One.

"The size of this slim volume belies the profound message of hope it contains."  —Christian Science Monitor

Paul Fleischman's novels, poetry, picture books, and nonfiction are known for innovation and multiple viewpoints. He received the Newbery Medal for Joyful Noise: Poems for Two Voices and a Newbery Honor for Graven Images, and he was a National Book Award finalist for Breakout. His books bridging the page and stage include Bull Run, Seek, and Mind's Eye. For the body of his work, he's been the United States nominee for the international Hans Christian Andersen Award. He lives in California. www.paulfleischman.net.

★ “A beautiful, multicolored harvest. The message of diversity, people, and sensibility is universal, and beautifully cultivated by an author who has a green thumb with words.”
— School Library Journal (starred review)

★ “The story’s quiet beauty unfurls effortlessly and lingers after the final page has been turned.”
— Publishers Weekly (starred review)

“Each voice sings with the rhythm of culture and personality.”
— Children’s Book Review Magazine

★ “The characters’ vitality and the sharply delineated details of the neighborhood make this not merely an exercise in craftsmanship or morality but an engaging, entertaining novel as well.”
— ALA Booklist (starred review)