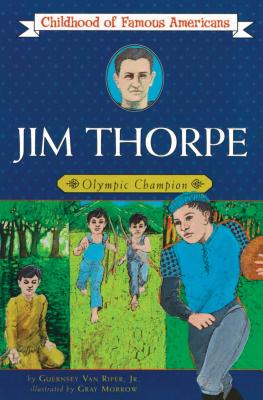 
Not in stock. At Our Partner Warehouse: Usually Ships in 4-7 Days.
Jim Thorpe: Olympic Champion is Guemsey Van Riper Jr.'s biography of a world-class athlete.

A biography of the Native American known as one of the best all-round athletes in history, for his accomplishments as an Olympic medal winner as well as an outstanding professional football and basebell player.
Guernsey Van Riper, Jr. attended DePauw University in 1926. He earned two varsity letters as quarterback on the football team and one letter as a first baseman on the baseball team. After graduating, he worked in advertising then became an editor at Bobbs-Merrill Publishing Company. He turned his love of sports into books, writing biographies of Lou Gehrig and Knute Rockne along with ten other children’s books.

Dwight Graydon “Gray” Morrow (1934–2001) was an American illustrator who contributed to many comics and children’s books. He was the cocreator of Marvel Comics’ the Man-Thing and DC Comics’ vigilante El Diablo.